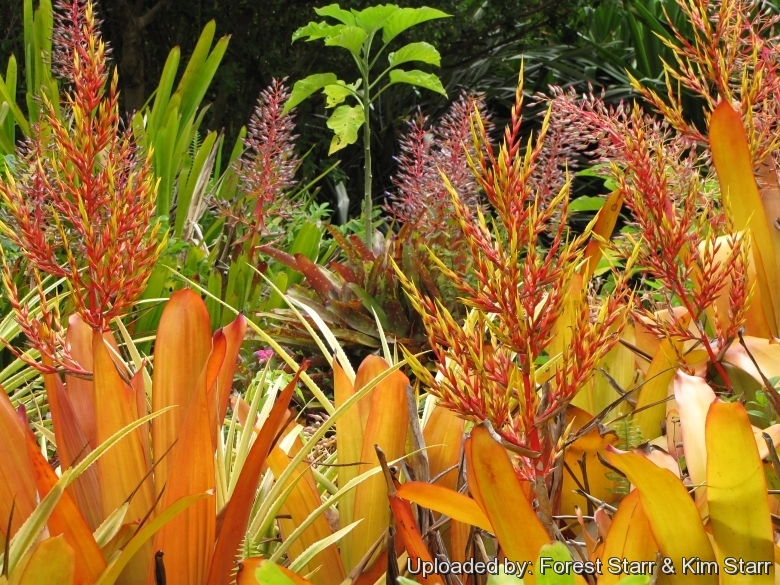 Origin and Habitat: This plant grows in the Atlantic Coast of Brazil, specially Bahia and Espírito Santo, and it is often used as an ornamental plant elsewhere in the tropics.
Habitat: It is found growing in trees and in the shrubby coastal sand dune habitat known as ‘restinga’ which is an ecosystem of Atlantic Forest biome in Brazil. It may also be found in coastal rainforest. It can grow on the ground or as an epiphyte.
Ecology: In many bromeliad species, the cupped rosette of leaves catches rainwater, and in Aechmea blanchetiana this may produce pools of up to half a litre in volume. These pools are often inhabited by animals such as frogs.

Description: Aechmea blanchetiana is an attractive bromeliad both terrestrial or epiphytic which attains a height of about 0,6 metres ( up to 1,8 or more metres when flowering) and a width of at least 1 metre. The colour of its leaves ranges from reddish gold, orangish gold, goldish yellow to green, depending upon the amount of sunlight it receives.
Rosette: Tight funnel shaped with about 12 leaves.
Leaves: up to about 90 cm long, strap-shaped, upright and straight or slightly curved. Sheaths broadly ovate, very large, entire, dark brown, covered with minute appressed scales; Blades ligulate, broadly rounded and apiculate, to 10 cm wide, leathery, with beautiful colours that may vary from green to orange-red, with red tips and covered with minute pale appressed scales especially beneath. Margins densely serrate with dark spines 1 mm long and a spine at the tip.
Flowers: It produces a gorgeous erect inflorescence (a multi-branched lax panicle) sitting high above the foliage. Scape, to 15 mm in diameter; branches lax-flowered, reaching 30 cm in length, the lower compound; Although the flowers themselves are quite small (4 cm long) yellow, and ephemeral, they are surrounded by conspicuous red bracts with yellow tips, the shape of which is alluded to by the genus name, Aechmea, which means ‘spear point’. Calyx with ovary 2-3 cm long; sepals lanceolate, 2-3 times the length of the ovary, conspicuously mucronate.
Blooming season: Spring. The flowers don´t last long, but the inflorescence stays showy for months.
Fruits: Small purple berry.
Seeds: Small, smooth and elliptical, around 2 mm in length.
Remarks: There are several cultivars distinguished for wider leaves of more robust nature or with slimmer foliage, and more profuse in suckering. Some take on a more red colour, while others are more orange-yellow. 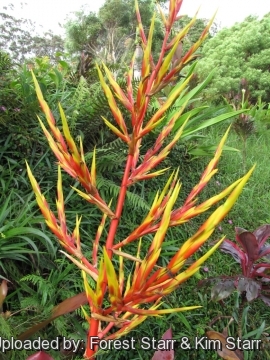 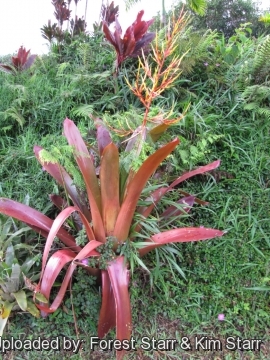 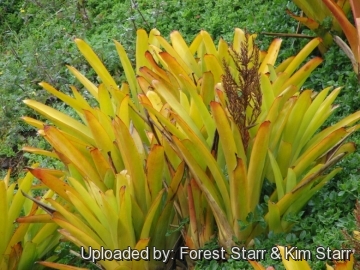 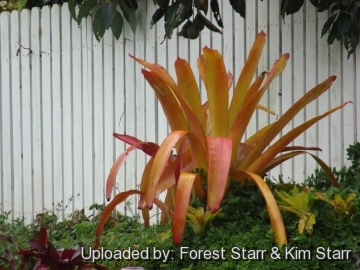 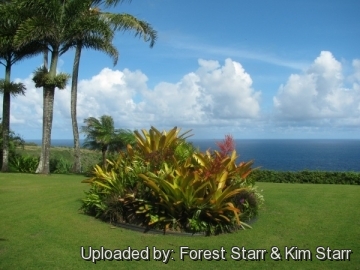 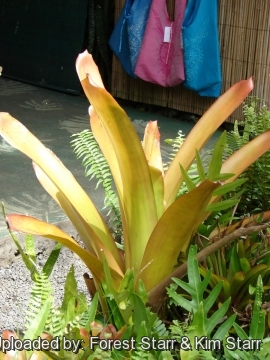 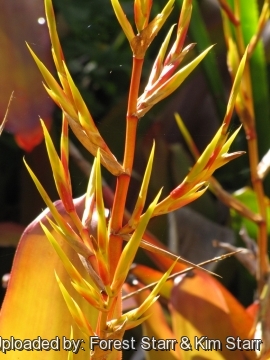 Cultivation and Propagation: Its attractive foliage makes Aechmea blanchetiana popular as an ornamental plant, but be sure to give them some space. In just a few years, these giant bromeliads can quickly fill a large area in the dry garden. They pair exceptionally well with cacti and succulents.
Soil: It require moist organic but well-drained soil, but adapts to sandy, rocky, seashell filled and alkaline limestone mix.
Moisture: It needs a lot of water, but grows also with minimal supplemental watering.
Exposition: This is one of the sun-loving bromeliads suited for full sun or partial shade. Best colour is achieved in full sun, and during the dry, parched winter months.
Hardiness: It needs high temperatures. (USDA zones: 10-12)
Salt hardiness: It is salt tolerant.
Maintenance: Always keep the centre of the rosette full of water.
Warning These plants are viciously armed with the typical Aechmea, super sharp, tiny, saw-teeth spines along the margins. Weeding around them requires long sleeves, a hat, gloves, eye protection, jeans, and a lot of caution.
Traditional uses: This species is also exploited for its thin fibres, which are used in weaving.
Propagation: Pups, seeds.